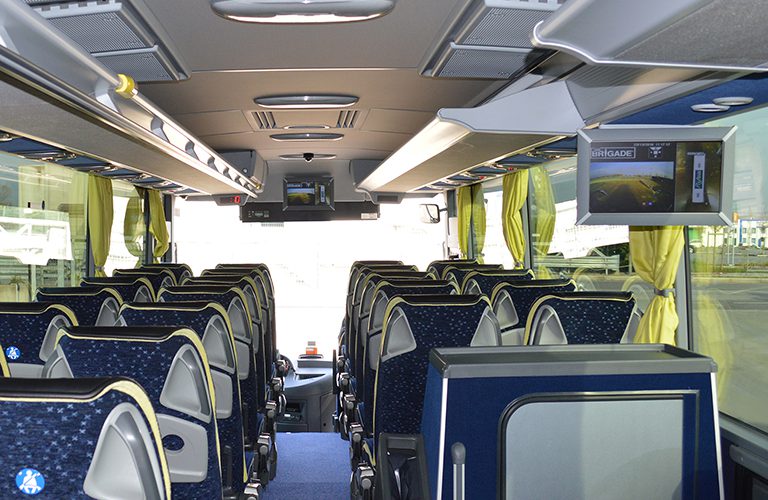 When we talk about blind spot cameras and sensor systems many of us will immediately picture a lorry or industrial looking tipper truck as the main vehicles to benefit from such devices.

But there are many large vehicles on the road that such systems can be fitted to, including buses. Hundreds of thousands of single and double deckers take millions of us to and from work and across the country every year.

Having to handle a vehicle that is both long and wide, and often having to negotiate tricky turns and narrow roads as part of their routes, bus drivers are always having to keep a close eye on their blind spots, back and sides of their vehicles.

Camera monitors can help bus drivers avoid incidents, accidents and collisions by giving them a live feed of what’s happening around their vehicle – but they can also be of vital importance to keep an eye on what’s going on inside.

Incidents of crimes on board buses have, sadly, become more commonplace in recent years and very often camera footage can help in ensuing investigations.

As important public service buses carry thousands of commuters, shoppers, families and friends on billions of journeys every year across the UK. But they have become the scene of often shocking incidents with hate crimes, shootings and even stabbings reported on some of the country’s networks.

In a recent horrifying case, a man was stabbed to death on board a bus in Birmingham. The 36-year-old victim was travelling on the 11A service through the city. Soon after the incident in January police released video stills of the alleged attacker and a man was arrested just hours later.

In March this year police investigating a shooting on a number 25 bus as it travelled through Ilford, east London released a video still from on board the service as part of their enquiries. An 18-year-old man was shot in the back of the head with a bullet fired from a ball bearing or BB gun as the bus travelled on Romford Road.

The victim was not seriously injured but did require hospital treatment. As part of their investigation, police released a video still of a man they wanted to speak to in connection with the incident.

These incidents show how important video footage from camera monitors of what’s going on inside a bus can be when it comes to helping the police if and when a crime is committed.

Buses can also, unfortunately, be a prime target for vandals, suffering scratched paintwork, smashed windows and damaged doors on an all too regular basis.

Last summer a family-run bus firm near Chippenham, which runs school buses among its services, suffered an estimated £30,000 worth of damage after vandals attacked 12 vehicles. On-board fire extinguishers were stolen and let off and windows were smashed during the attack on the Faresaver fleet in August 2016.

In the same month, a bus was attacked by two men, one of whom witnesses said was carrying a machete, as it travelled through Glasgow. And in January this year two neighbouring coach firms in Pembrokeshire were targeted by vandals, who damaged a total of five vehicles.

Having video footage of such events can no doubt play a part in helping to catch those responsible.

In Nottingham, however, they have gone a step further in a bid to stop transport vandalism – by using a ‘Trojan’ bus to catch offenders. The bus, which looks like a standard Nottingham City Transport vehicle, features toughened glass and instead of passengers, carries council staff and police.

It is sent to known problem areas at peak times, usually after dark, in good weather and during school holidays, and has been credited for driving down reports of transport vandalism in the city.

Speaking to the BBC in 2013 Nicola Tidy, from Nottingham City Transport, said: “Some people think buses are fair game and this shows they are not.”

As well as keeping an eye on blind spots and potential hazards in the road when manoeuvring, our camera monitors can keep a clear eye on what’s going on inside a vehicle. Providing a clear picture, even in low light conditions, the footage they capture can also be used in the event of an insurance dispute or false claim.

They are suitable for buses, as well as plant machinery, HGVs, agricultural transport and specialised vehicles, such as tankers and refuse lorries.

For more information about our wide range of camera monitors, contact us here or call our friendly team on 01322 420300.