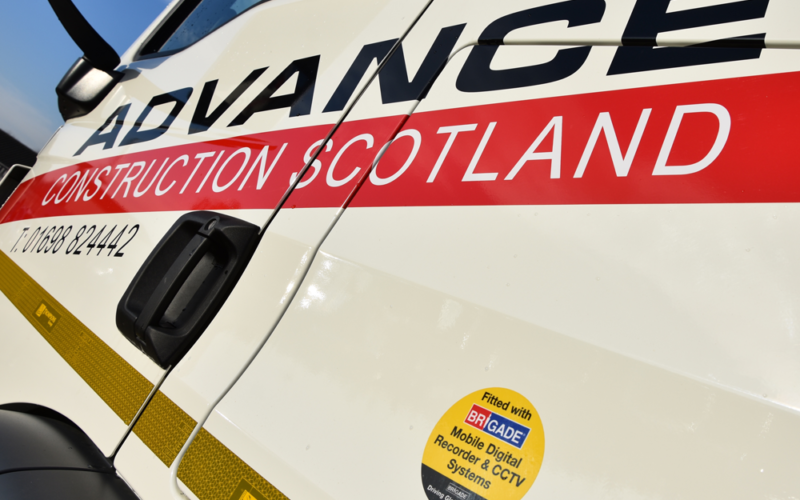 Advanced Construction Scotland (ACS) is a high profile groundwork and civil engineering company that often has hundreds of vehicles on the road at any one time, making them a target for false insurance claims. Without evidence, it is difficult to refute claims and this puts pressure on insurance premiums, operating costs and ultimately bottom line profit.

ACS was the first company to trial Brigade Electronics new 3G capable mobile digital recording system with live access, on a 32-tonne tipper, when the driver had a head on collision with a car.

David Sandilands, Director at Banlaw Systems who supplied the equipment and installed at weekends, ahead of schedule to avoid vehicle downtime, was able to access the data remotely before the emergency services arrived. He could clearly see the devastation of the vehicle and the driver who was visibly shaken up on the side of the road. He was able to check speed and positioning of the vehicle as he watched a car on the wrong side of the road drive straight into the tipper.

David was able to walk into Advanced Construction Scotland at Belshill with the footage on a USB stick and confidently say to Colin Sinclair, General Manager at ACS:

“You can reassure your driver that he was not culpable.”

The driver must have felt immense relief, especially without having to wait for the outcome of a lengthy investigation.

Colin at ACS said: “We recently had an accident involving one of our tippers where the system allowed us to instantly refute the 3rd party claims and showed that our driver was not at fault. This saved a lot of wasted time further down the line dealing with claims when accident recollections were not as sharp as at the time of the incident. Having this record on film has proved to be invaluable and has shifted all blame onto the other party. Our insurers could pursue our claim against them, rather than the situation being clouded by counter claims and resulting in both insurance parties striking a deal to clear the claim off their books.”

Both insurance companies were also pleased. It was evident who was at fault, despite the third-party driver speaking limited English. Without the footage, it would probably have been settled 50/50 and ACS’s insurance premiums would have risen.

Banlaw who are one of Brigade’s valued service partners trained ACS staff on how to use the Dashboard software to download data, and also set up the software on company laptops and phones to support a smooth handover.

The 3G MDR technology has immense implications for crash investigations. Had the incident resulted in a fatality, then the driver would have been immediately arrested while he awaited the outcome of the investigation. Instant, remote access to recorded footage can provide peace of mind as well as vital evidence.

Colin explains: “The Brigade 3G digital recording system allows our management team to study any incidents in real time preventing the need to rely on witness statements, which can be clouded. We can evaluate situations and form conclusions based on actual events as seen, rather than as reported, cutting out any false claims by either our drivers or third parties. Often tipper vehicles can be seen as easy targets for claims and we are now more confident that any such claims can be refuted protecting both our drivers and our company’s reputation. The MDR is an invaluable addition to our management systems and we expect to see a decline in spurious 3rd party claims involving our vehicles.”

Brigade’s digital recording system has further uses to help make fleets run more efficiently. Colin said: “Using the systems live GPS and footage functionality can also assist in route management as we can view live traffic situations and advise other drivers to avoid hot spots, thus allowing our vehicles to steer clear of any time consuming and fuel burning traffic jams. We are delighted with the benefits that we are seeing from the Brigade system, the advantages that it offers to our fleet management and the support it lends to our drivers.”