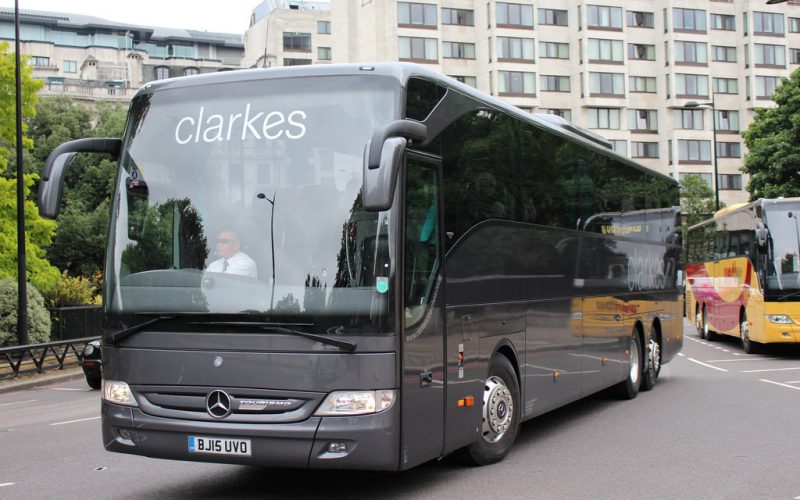 South London based luxury coach operator, Clarkes of London has fitted Brigade Electronics’ safety systems on its ‘flagship’ vehicle, the i8 Irizar DAF Integral, currently in use by Watford Premiership Football Team.

With vehicles in frequent operation throughout congested city centres, vulnerable road user and driver safety is a priority for Clarkes of London. Andrew Nixon, General Manager at Clarke’s explains, ‘Safety is a subject that we take extremely seriously and we needed a system with a difference, something that would ease driving a large vehicle in congested cities whilst giving the driver confidence in his abilities.’ For Clarkes of London Brigade’s intelligent camera monitor system, the Backeye®360 was the solution.

Designed to assist low speed manoeuvrability, Brigade’s Backeye®360 system works by providing the driver with an all-round view of the vehicle in a single image on the in-cab monitor. The system simultaneously blends and stitches the live images from four ultra-wide cameras together to produce a single bird’s-eye-view image, effectively eliminating blind spots. Nixon Continues, ‘The system is fantastic, the driver utilises the monitor especially when manoeuvring in tight locations and has reported crystal clear vision. In the past 6 months we have not experienced any body damage to our 14-meter long football team coach, which is testament that the system works.’

In addition to the Backeye®360, with personal injury claims and cash for crash scams on the rise, Clarkes felt in necessary to take further action and trial Brigade’s Mobile Digital Recording device with a view to protect its fleet of 140 passenger carrying vehicles. Nixon explains, ‘Brigade has a good name in the vehicle safety industry and our insurance company were willing to offer a significant discount with the CCTV system fitted.’ Brigade’s MDR-408-1000, records images from up to 8 cameras onto a 1TB hard-drive. The system has the ability record up to 1164 hours of footage and incorporates a built-in GPS and G-sensor.

Since fitting the systems Clarkes of London has reported extremely positive driver feedback. Nixon concludes ‘Our drivers cannot sing the praises of the system enough; it makes driving a large vehicle a pleasure and improves the safety of our passengers and other vulnerable road users.’