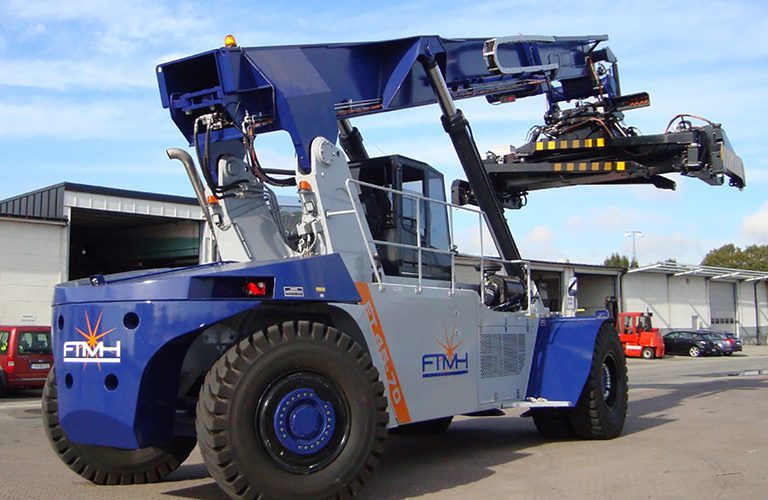 FTMH (Fantuzzi Team Material Handling) was established in Brescello in April 2014, and although the company is young, they boast extensive expertise in the production of Reach Stackers. While FTMH’s initial purpose was to focus activity on the maintenance of existing machines, as early as May 2014 the company presented its first Reach Stacker at Cemat in Hannover.

FTMH’s attention to customer requirements has lead them to adopt state-of-the-art solutions such as Brigade’s Backeye®360 Select, a sophisticated camera system which provides the operator with an all-round view of the vehicle, thus guaranteeing greater safety than the two cameras supplied as standard.

FTMH installed Backeye®360 Select on a Reach Stacker operating at the port of Trelleborg (Sweden), one of Europe’s biggest ferry ports, the access route for Scandinavian transport.

A fifth camera, positioned outside the equipment, has been added to the four camera Backeye®360 the system, so the operator can also see when travelling with a load completely. Thanks to smart software developed by Brigade which flattens wide-angle images (cameras have a very wide angle with 187° lenses), Backeye®360 Select instantaneously eliminates fisheye distortions and, balances the brightness of the various frames, merging them in real time and displaying them on the cab monitor in a single image.

To guarantee ultimate operating safety, FTMH has installed a second Brigade Electronics device: bbs-tek® White Sound® (broadband) reversing alarm, which is directional and therefore easily located. In the chaos that reigns in a port, a traditional acoustic alarm would merge with other sounds, lowering the alertness of those listening to it, who wouldn’t be able to immediately identify its source. Thanks to its characteristic “shh shh” sound, bbs-tek® can easily be heard only in the danger zone, reducing noise pollution. This is consequently a system which makes the working environment safer and less stressful.

FTMH designs and produces tailor-made machines, which are solid, efficient and safe. Safety is a pivotal aspect for FTMH, which is why the company chose to rely on the leader in this field: Brigade Electronics.