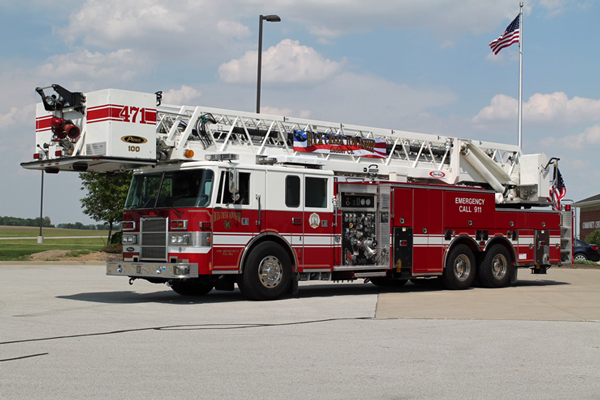 It is essential that fire truck drivers have maximum visibility for both high-speed driving and low-speed maneuvering as they carry out their life-saving work. Accidents causing injury and death among fire crews continue to be a problem across the USA: in 2018, 12 firefighters died in vehicle crashes, according to figures from the National Fire Protection Association. In Greenfield, Indiana, Brigade’s Backeye®360 cameras have enhanced the safety credentials of the fire department’s vehicles, protecting not just fire crews, but other road users in their vicinity.

Buck Creek Township Fire Department serves a 36 square mile area in Greenfield, Indiana, providing fire and emergency medical services for its community. Emergency calls come in from a wide variety of settings, from rural residential properties to huge warehouses and industrial sites, totalling an average of 1200 medical and fire calls annually. The department’s firefighters and medical responders are also on call to travel further afield when required: in September 2019, for example, a 10-strong Buck Creek crew was deployed to South Carolina to assist rescue efforts in the wake of Hurricane Dorian.

The department employs 26 full-time and 14 part-time paid firefighters, as well as 14 volunteers. It runs numerous vehicles, including three fire engines, seven ambulances, one ladder truck, one tanker and two grass trucks. Of these, the ladder truck has a unique set of safety considerations. With its wide turning radius due to a long wheelbase, it runs the risk of going off road as it turns, with the potential to strike other vehicles or objects in its path. Additionally, the ladder truck has outriggers that project from the side of the vehicle once it is parked – it is essential that the driver can accurately assess the space around the truck to ensure that the outriggers can adequately extend.

Clearly it is crucial for firefighters to have a complete view of the space around their trucks. However, even with the expert use of mirrors, blind spots cannot be eliminated completely.

Time is also a factor here: research has shown that in the time it takes to scan four mirrors, assess and then react to hazards, a vehicle could travel as far as 33 feet even at speeds as low as 3mph. Thankfully, with the latest camera technology, it is possible to eliminate this problem entirely.

Brandon Wilch, firefighter, and paramedic at Buck Creek Township Fire Department, contacted us to discuss the installation of a Brigade Backeye®360 camera on its ladder truck. The Backeye®360 provides a real-time surround view of the ladder in a single image. This eliminates blind spots and saves the driver from having to process information from several monitors or mirrors in quick succession, making it much easier to spot and assess possible hazards, such as objects and people.

Brandon says: “I was aware of Brigade as I work a part-time job at a hospital EMS system which uses their 360 system on all of their ambulances. The idea for our ladder truck was to have the ‘overhead view’ that the 360 system provides to help avoid going off-road or striking objects. We also wanted the availability to see our outrigger locations before parking the truck.”

We were delighted to work with Brandon and his colleagues at the Buck Creek Fire Department, fitting our Backeye®360 camera on the ladder truck as well as the department’s tanker. “The results have been instantly noticeable”, says Brandon.

“We feel that having the camera systems installed onto these two trucks has helped to reduce collisions with objects and increased the safety for our crews while operating the apparatus. This is particularly helpful on county roads or in neighborhoods where people park on both sides of the road.” Brandon adds that the second major area where the cameras are invaluable is when backing into spaces. “Fire and EMS apparatus are backed into bays, into driveways, at scenes when trying to accomplish placement. Having the system gives us an additional level of situational awareness while navigating our trucks.”

Indeed, the Backeye®360 cameras have been so successful that the fire department is planning to add a third system to one of its engines later this year. We’re proud to report that Brandon is not just delighted with our product, but with our customer service, too: “All of the contacts we have worked with at Brigade have been amazing folks,” he says. “From the initial quote, to the installer, even to the staff managing the billing.”

It’s wonderful to hear such warm words, and we very much look forward to working with the Buck Creek Fire Department as it continues its vital work in the Greenfield community.