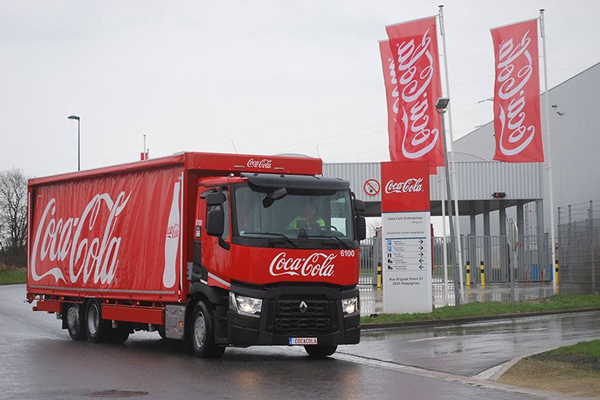 Coca-Cola is perhaps the best-known company in the world, and we dare say that there are very few, if any, people who have never heard of Coca-Cola. ‘’Many people have the impression that Coca-Cola is a major international player, but in fact, we are a super local company”, says Pascal Libens – Fleet Manager Logistics BeLux Coca-Cola European Partners.

Coca-Cola European Partners (CCEP) is a group that employs around 23,500 people in 13 countries, who together produce and sell the world’s best brands in Western Europe. Logistic Benelux is one of the few sites that takes care of the distribution to its customers. It has more than 100 trucks, which drive every day in Belgium and Luxembourg to supply supermarkets, hypermarkets, schools, companies, municipalities, etc. with its Coca-Cola products. These trucks depart from 1 of the 5 distribution centers for 5 days a week

In Belgium specifically, Coca-Cola consists of 3 branches. First, the “Distribution” arm of Coca-Cola, which supplies to retailers. The second branch is “Full-Service Vending” and consists of around sixty trucks. These trucks make long stops with customers and therefore drive relatively few kilometers.

The third branch is the “Event” channel. Approximately 10 vehicles drive to deliver to major events such as Werchter, Red Devils contests, and concerts. Until the end of August, this branch will be at a standstill due to the Coronavirus.

“Safety comes first at Coca-Cola. On every site, every production line and of course during transport. We want to reduce industrial accidents to zero. Every accident is one too many and we’re talking about safety for staff and road users,” says Pascal.

‘’In terms of transport and distribution, there was a growing need to protect the driver and people around the vehicle. Fortunately, I came into contact with Brigade Electronics at the Transport and Logistic Awards

in Antwerp and made an appointment with Dirk van Schuylenbergh – Business Development Manager at Brigade. Dirk came with his demo vehicle and showed us live, exactly how the Backeye®360 operates and how the driver can see the entire vehicle and its surroundings from above. Being able to see all this on one monitor, instead of having to work with various cameras and mirrors, was ultimately the deciding factor. Last year, the government also introduced a subsidy scheme for transport companies that invest in safety and this made the choice even easier.”

“In total, we have now fitted 70 vehicles and plan to fit about 30 new ones this year. 100% of our fleet will be equipped with the Backeye®360, but also with ultrasonic obstacle detection and a speaking alarm.  Ultrasonic detection ensures that the driver is alerted to cyclists, pedestrians, or objects next to the vehicle and the speaking alarm warns pedestrians and cyclists that the vehicle is about to turn right.”

“Brigade has provided a solution to create optimal safety for both the driver and people around the vehicle, both when maneuvering and on the road,” says Pascal Libens. “We are receiving positive feedback from various drivers, but it will be some time before we can take stock of how the system works. One has to adapt to a totally new view, and it always takes time to get used to new ways of driving. However, I am convinced that once you drive with the system, you won’t want to drive without it!”

‘’The cooperation with Brigade was very pleasant. Two very experienced technicians were used to install the systems and they know our vehicles and our sites through and through. As far as I’m concerned, they will continue to fit out our vehicles.’’

‘’A next project could be, for example, the MDR – Mobile Digital Recorder.  This recorder records images from the 4 cameras and these are stored on a hard disk. If during loading and unloading, for example, a driver is accused of doing something wrong, the recorded images can show whether this was the case or not. In addition, it constitutes irrefutable evidence in the event of an accident or damage. We often receive unjustified damage claims. It is reassuring to be able to check exactly what caused an accident and whether or not the driver was to blame.”

‘’Our goal is to record incidents around a vehicle. These images can then serve as protection against certain calamities. So, we still have a nice challenge ahead of us!”

If you would like to ensure your fleet is equipped with the latest vehicle safety systems, please do not hesitate to contact us.