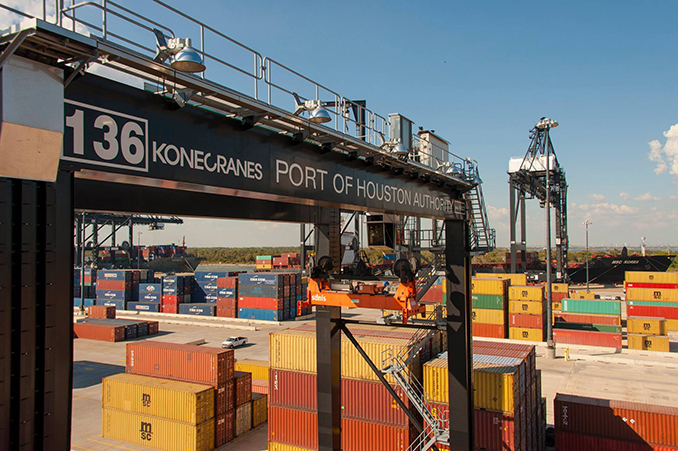 When construction began on the Port of Houston Bayport Terminal, the noise pollution was disturbing local residents. The biggest cause for complaint was the loud and constant beeping of reversing alarms.

Reversing alarms are a vital and necessary reversing safety aid, however conventional reversing alarms are fraught with noise and safety issues, especially when used out of normal working hours. Excessive exposure to a conventional beeping alarm can cause site workers to become desensitised and ignore warnings. The high pitched beeping can cause annoyance, fatigue and long term hearing loss, with multiple alarms causing disorientation.

A period of extensive product testing commenced before it was decided to ﬁt white sound reversing alarms to all machinery working on the Port. The investment proved successful as noise related complaints from the Bayport Area fell dramatically, whilst worker safety improved.

The White Sound® bbs-tek® alarms emit a unique “ssh ssh” sound using multi frequencies. It is instantly locatable, so site workers and pedestrians are immediately aware of which vehicle is reversing and where it is coming from. It is directional, concentrating the sound in the danger area, reducing noise nuisance. White Sound® dissipates more quickly beyond the danger zone, so it is less of a noise nuisance to local residents and is less likely to be ignored by workers due to overexposure.

Les Blomberg, Director of Noise Pollution Clearinghouse says, ‘bbs-tek® is signiﬁcantly less intrusive in surrounding  environments than narrowband back-up alarms. Our testing and analysis conﬁrm that bbs-tek provides a superior warning for those in the danger area. It is more easily located and less likely to experience interference from reﬂecting surfaces than narrowband back-up alarms.’