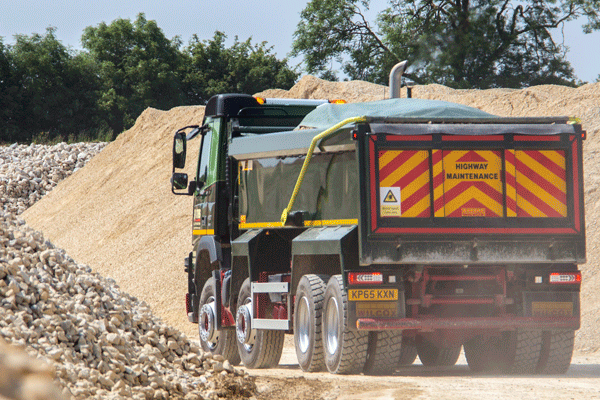 Based in Oxfordshire, a city well known for its cyclist activity, Smiths & Sons has taken a proactive approach towards ensuring the safety of vulnerable road users with the use of Brigade Electronics products. Concerned about driver information overload and encouraged by the introduction and industry acceptance of specifications such as CLOCS and FORS, Smiths’ has specified Brigade’s Backeye®360, Sidescan® systems and mobile digital recording devices for its entire tipper fleet going forward.

Smiths’ Transport Manager, Paul Needle explains, ‘In the past we have been actively involved in vehicle safety days around Oxford and we were also involved in the launch of the Mineral Product Associations’ cycle safety scheme. Smiths are very proactive when it comes to vulnerable road user safety and having trialled various vehicle camera systems, we were the first tipper operator to fit the Backeye®360 system ’.

Brigade’s Backeye®360 is an intelligent camera monitor system that assists low-speed manoeuvrability, providing the driver with an all-round view of the vehicle in a single image on the in-cab monitor. The system simultaneously blends and stitches the live images from four ultra-wide cameras together to produce a single birds-eye view image, effectively eliminating blind spots. These images are then recorded on to Brigade’s MDR-404-500, 4-channel mobile digital recording device. Fitted with a 500Gb hard-drive and built-in GPS the device has the ability to record up to 1164 hours of footage from the Backeye®360 camera system.

In addition, Smiths & Sons have fitted Brigade’s Sidescan® Obstacle Detection kit to the entire fleet. Required to meet specification standards including FORS, CLOCS and Crossrail, the 4-sensor system is fitted along the bottom of the cab on the nearside. Working in conjunction with a Backchat® speaking alarm, the system provides an audible warning alerting both the driver and the vulnerable road user to a potential hazard when the vehicle is turning or manoeuvring at a low speed.

Since fitting the systems Smiths & Sons has reported driver benefits, commenting in particular on the reduced information overload. Paul continues, ‘I was very impressed with Brigade’s product, the Backeye®360 in particular. The drivers immediately saw the benefits of the all-round view and the system has now been made a part of our standard specification for all new vehicles’.