Evolution of the reversing alarm 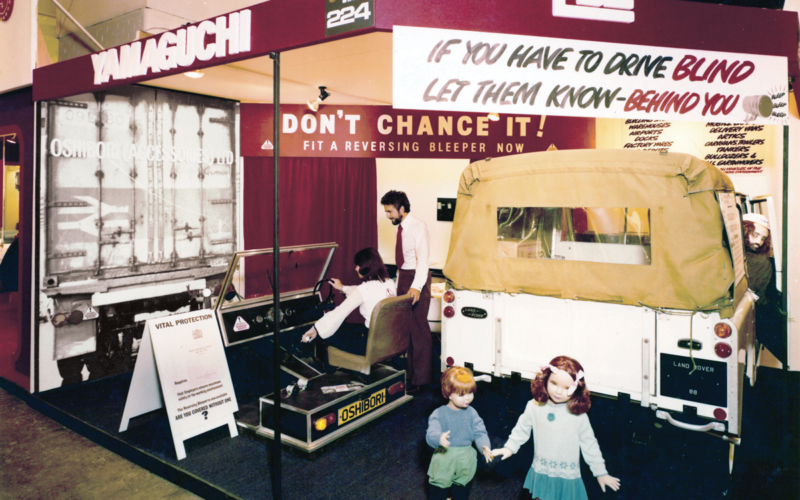 There’s no doubt that automation has transformed heavy-duty industries such as agriculture, mining, and construction. Machinery and commercial vehicles have led to massive increases in productivity, fuelling worldwide industrialization and enabling today’s global economy.

However, with progress comes risk. The bigger and more powerful the vehicle, the greater the danger for workers or vulnerable road users in its path. In the post-Second World War period, accidents while reversing became a particular danger, as blind spots around the rear of heavy vehicles could not be eliminated with mirrors alone.

While the use of spotter became common, this labor-intensive solution was not always practical in every scenario – and indeed brought its own human risk.

The solution? The electronic vehicle reversing alarm. The first tonal ‘beep beep’ alarms were introduced in the US and Japan in the 1960s. In the mid-1970s, Chris Hanson-Abbott, then a

London-based shipbroker, was in Tokyo when he heard an alarm beeping from the rear of a reversing truck. Chris was so impressed by the safety device that he formed his own company to market reversing alarms in Europe. Brigade Electronics was born.

The potential for these alarms to save lives was quickly recognized. In 1979 in the US, the Occupational Safety and Health Administration (OSHA) made reversing alarms mandatory on large construction vehicles.

From safety to complacency

Despite the huge advance in safety represented by reversing alarms, by the 1990s there began a rising chorus of criticism. Studies found that pedestrians had become so used to the ‘beep-beep’ sound of reversing alarms that they were often ignored. It also discovered that drivers tended to lose the perception of responsibility for being vigilant behind the wheel, relying too heavily on their alarms for avoiding collisions

As well as complacency from both drivers and vulnerable road users, tonal alarms caused disturbances, particularly in urban areas.

We recognized these various challenges and set about finding a response. Research began on a new wave of alarms that would be safer for those at risk, while offering minimal impact on the environmental soundscape.

A quieter and safer alternative

Our answer came in the form of ‘white sound’. Created using broadband technology, it emits a ‘ssh-ssh’ sound, similar to breaking waves, that’s highly directional, gentler on the ear and easier for pedestrians to pinpoint. It’s estimated that this innovation, which is used on our bbs-tek® White Sound® Warning Alarm, has helped to save thousands of lives since being introduced in 2001. It is also currently the only reversing alarm to receive a coveted Quiet Mark award from The Noise Abatement Society – the only international mark of approval for low-noise technology.

However, for drivers, reversing alarms are only part of the road safety story. Alongside training, which is crucial to maintaining and improving safety, drivers have benefited from the help of additional technology that complements reversing alarms by eliminating blind spots and providing them with both visual and audible alerts. These include obstacle detection radars, 360o camera systems, and camera monitor systems.

White Sound® alarms are now the accepted standard on many worksites. For example, on UK Crossrail sites, only vehicles with this kind of audible warning can be used, in order to limit noise nuisance for local residents.

Our latest range of SMART bbs-tek® alarms also includes a self-adjusting facility, which means the alarms continually adjust to 5-10 decibels above the background noise.

Road safety technology is set to continue to evolve well into the future. With the proliferation of electric vehicles and the possibility of changes to legislation, new solutions will always be required to address these changes, so we can ensure that roads remain safe for all.

For more information about the bbs-tek® White Sound® Warning Alarm, or any of our safety products, please don’t hesitate to get in touch . We look forward to hearing from you.