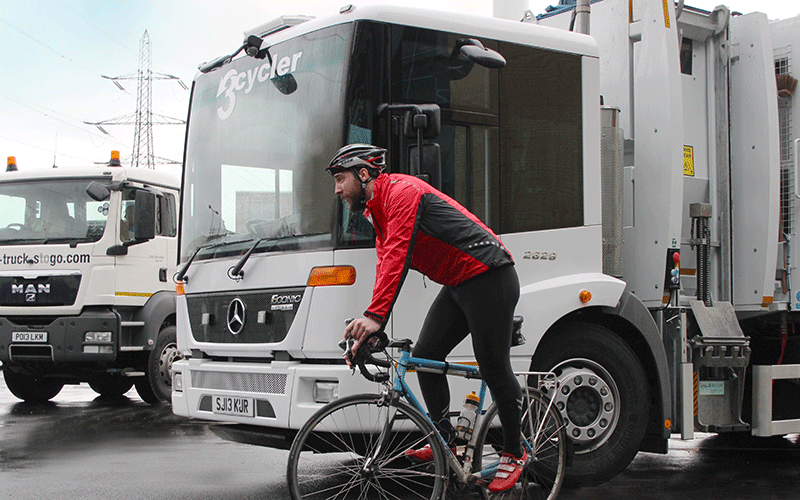 The number of cyclists killed on London’s roads has been well documented in recent years – in particular those accidents involving lorries.

The number of cyclists killed on London’s roads has been well documented in recent years – in particular those accidents involving lorries.

Sobering figures revealed that nine out of 14 incidents that led to a cyclist’s death on London’s roads in 2013 involved HGVs. In a bid to make the capital a more secure place for all road users, a Safer Lorry Scheme was introduced, which meant only those vehicles fitted with basic safety equipment would be allowed to drive in London.

Since it was introduced the scheme has been hailed a success with the vast majority of HGVs that use London’s roads being fitted with additional equipment to make them safer.

Here, we explore the scheme’s background and rules and how it is clamping down on blind spots.

The journey behind the Safer Lorry Scheme

The scheme was introduced under then Mayor Boris Johnson and was the first of its kind to be introduced in Britain. Reducing the number of people killed or seriously injured on London’s roads was one of Mr Johnson’s and TfL’s top priorities.

Protecting the most vulnerable – pedestrians, cyclists and motorcyclists – was a key element of Mr Johnson’s safety drive, and as HGVs, lorries and trucks had been involved in a “disproportionate” number of fatal crashes, the spotlight was turned on these vehicles.

A feasibility study was carried out, alongside a six-week consultation, before the scheme was introduced in September 2015 (the same year that lorries were involved in seven of eight cyclist fatalities on London’s roads).

It set out rules that all vehicles over 3.5 tonnes, that are not already compliant, must be fitted with:

The scheme started by Boris Johnson and TfL has continued to grow under new London Mayor, Sadiq Khan. Earlier this year he proposed that trucks and HGVs be fitted with larger windscreens and bigger doors, so drivers would have “direct vision” of other road users from their cabs.

A 12-week consultation has now been launched into this proposal, which would ban the HGVs considered the most dangerous from London’s roads by 2020, and Mr Khan is keen to continue to tighten the scheme’s rules up to 2024.

Speaking earlier this year he said: “HGVs with poor vision of cyclists, pedestrians and other road users from their cabin should simply not be allowed on London’s roads.”

Clamping down on blind spots

The measures introduced so far under the scheme will no doubt have helped combat the dangers blind spots can present. Additional, bigger mirrors can improve drivers’ visibility, and side guards can help prevent an accident from becoming a serious injury or fatality.

When it comes to safety there are never too many measures drivers and operators can put in place to further protect their fleet and fellow road users – and this is where Brigade can help.

Our wide range of camera monitor systems, ultrasonic obstacle detection and radar sensor systems, alongside our reversing warning alarms, are all tried and tested devices that can improve safety for all road users – by eliminating blind spots and giving drivers a helping hand when making tricky manoeuvres.

To find out how our commercial vehicle safety products can help boost the safety of your fleet, contact us here.