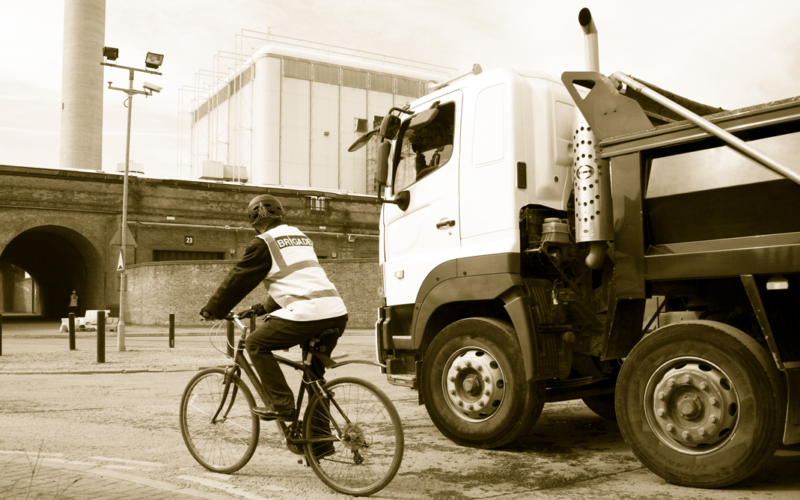 The debate over urban road safety has been fuelled this summer following a dramatic collision on a busy London street between a cyclist and a lorry.

The accident, which was recorded on a headcam, shows a group of cyclists waiting at traffic lights. The cyclists intend to travel straight ahead, but they are in a left-turn only lane, on the inside of an HGV which is also travelling straight ahead. As the lights turn green and the cyclists pedal off, the lorry hits one of them and nearly knocks the rider off.

Miraculously, the cyclist manages to stay on his bike and shouts at the lorry driver to ‘look where he was’ on the road. In a heated row, the lorry driver climbs from his cab and argues back, claiming that cyclists should never cycle on the left side of an articulated lorry.

When the footage was posted on YouTube it led to a furious debate over who was in the wrong – a debate that was widely covered in the UK media. Many sided with the lorry driver, criticising the cyclists for waiting in a left-turn only lane. Others said it was the fault of the lorry driver, who should have given a wider berth to allow for cyclists on his left who may have been hidden in the HGV’s blind spot.

If you didn’t see the video, it can be viewed on YouTube here.

Wherever you stand in the debate, the controversy generated by this latest story only serves to illustrate the danger that can be posed when commercial vehicles and cyclists share cramped road space in urban environments.

According to the See Me, Save Me cycling safety campaign, 50% of cyclist deaths involve an HGV, yet these vehicles make up only 4% of traffic. Construction vehicles are most likely to be involved in such accidents, since cement mixers, tipper lorries and skip lorries have blind spots around the cab – areas that are completely obscured by the bodywork of the vehicle. In right-hand drive vehicles, blind spots will be worse on the left, and vice-versa for foreign-registered left-hand drive HGVs.

Whether or not he was in the wrong, the London cyclist who was filmed in the video is lucky not to have been killed. Blind spots can be a question of life and death, and here at Brigade, we never underestimate the dangers.

Even with the new measures implemented under London’s Safer Lorry Scheme the potential for accidents is ever-present. The more safety measures that can be put in place to help drivers, the more collisions will be avoided and the more lives will be saved. Our state-of-the-art camera monitor systems, ultrasonic obstacle detection and radar sensor systems as well as our reversing and warning alarms are helping to transform safety for all road users, whether in urban or rural areas or on construction sites.

If you’d like to find out more about any of our services or commercial vehicle safety products, please get in touch with our team here.