Smart motorways might seem like a relatively new concept, but technology to control traffic and ease congestion has been operating on M-roads since the 1990s.

While the majority of motorways have historically been controlled with a permanent hard shoulder, the latest updates to motorways across the UK involve all-lane running – where the hard shoulder has been permanently removed to provide an extra lane with emergency refuge areas at regular intervals.

Overhead gantries direct drivers with variable speed limits along with information about delays, accidents and other hazards. The idea is to keep traffic moving and avoid large queues from forming.

While drivers on the road will see these directions and respond accordingly, those who are joining a motorway might still be unaware that there are issues up ahead until they are already on the motorway or have seen the signs further along. This can be particularly frustrating for those operating in the logistics and haulage sectors when, with more warning, a journey could have been re-routed.

Connectivity, artificial intelligence and in-vehicle data are already helping to address this. 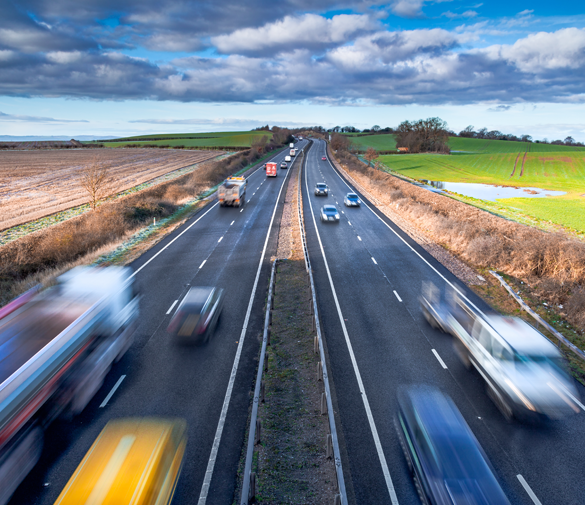 Fleet managers are requiring more flexibility than ever. This is especially true when it comes to managing large fleets with multiple vehicles that are travelling long distances or across borders.

Brigade’s MDR with BRIDGE is the ideal solution. The system comprises vehicle CCTV and a digital video recorder with 4G connectivity that can be linked to the Cloud. This means fleet managers can live track vehicles, providing numerous benefits for operators and drivers.

This includes location tracking so that managers can find their fleet anytime and anywhere, geo-fencing capabilities so managers can identify when vehicles are entering or leaving specific areas and trigger warnings that instantly notify fleet managers of incidents. For drivers, they can also send an instant notification in the event of an emergency. All these features greatly improve the fleet management experience and improve safety both on and off the road.

For further information about Brigade and our range of commercial vehicle safety products, please speak to one of our friendly team members.