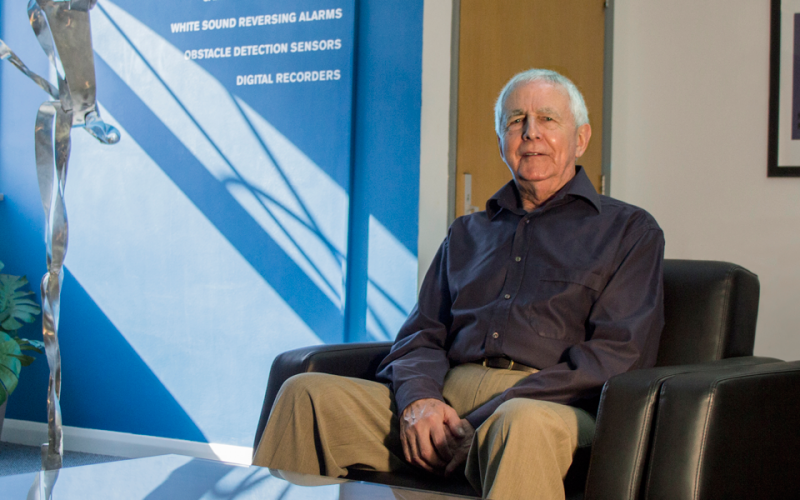 Since 1976 Brigade has been at the forefront of pioneering technology aimed at making roads and work sites safer for all.

From cameras and radars to sensors and ultrasonic detection, we have developed safety products for any kind of environment and for all vehicle specifications.

And we are proud to have introduced many firsts to the market, including the product that started the entire Brigade journey – the reversing alarm. Here, we explore our firsts and our mission for the future.

When Chris Hanson-Abbott set about introducing vehicle reversing alarms in the UK, he received a less than warm welcome. Unveiled at the Commercial Vehicle Show in 1976, Chris’s innovative safety product caught the attention of the press but his customers – fleet managers and vehicle owners – were less enamoured.

The government also knocked back his idea, announcing that reversing alarms contravened regulations – making them illegal.

But Chris, the founder of Brigade Electronics, was not deterred and continued on his quest to make roads safer for all. And he was successful when, two years later, he achieved his first sale – marking the introduction of the first reversing alarm to Europe.

This was quickly followed in 1980 by the introduction of the first Doppler radar system to the UK, which helped drivers detect objects while reversing, and in 1982 with Brigade’s ultrasonic rear detection system, the first of its kind available in Europe.

Paving the way to safer roads

Other milestones in our history include our worldwide expansion, with the establishment of our German group in 2002 and American arm in 2004. These have since been followed by the creation of offices in Italy, South Africa, and France – making us a global pioneer in road safety.

Throughout our long history our mission – and the original vision of our founder – remains the same: to make roads and worksites safer for all.

Our team are always investigating new technologies that we can capitalise on, and looking at ever more innovative ways of how to support drivers – giving them extra eyes and ears on the road.

Whatever your vehicle or site conditions, our products can help protect your company and your drivers. To find out more about the full Brigade vehicle safety range, and what would suit your fleet, contact our team.