Refuse trucks and road safety – how Brigade can help 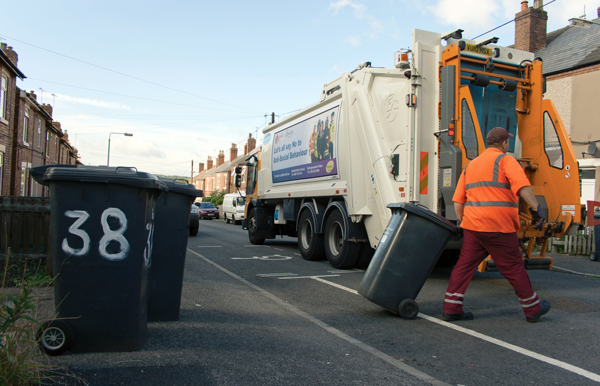 From narrow Victorian streets to new-build high density housing, negotiating residential roads can be a tough challenge for refuse vehicles.

In Britain and around the world, accidents involving bin lorries and recycling trucks are commonplace. Although planning regulations dictate road layouts to ensure safe access for waste vehicles, badly-parked cars and other obstructions can make collection days a dangerous challenge.

Just to take the example of one local authority in Britain, the metropolitan borough of Kirklees in West Yorkshire, there were 82 accidents involving rubbish collection vehicles in a twelve-month period during 2016/2017.

Poor weather, inconsiderately parked cars and narrow access were among the reasons for the accidents. Of course, not all these crashes were the fault of the bin lorry drivers. As a spokesperson for Kirklees Council pointed out: “Our crews drive nearly every inch of the district in all weathers . . . often driving during peak congestion times and having to move slowly and stop regularly to empty bins. This can cause frustration in other road users which sometimes leads to a lack of patience or abuse towards our crews, adding pressure to the situation.”

It’s a scenario that’s replicated not just across Britain, but globally – and it’s one that we at Brigade are working hard to help remedy. Waste vehicle fleet managers increasingly recognise the need for safety upgrades to give drivers better visibility as they manoeuvre their trucks. In addition, vehicle-mounted cameras synched with mobile digital recorders (MDRs) are proving invaluable in helping to provide irrefutable evidence in the event of an accident.

How Brigade products can help

Backeye®360 is an intelligent 360 camera monitor system designed to assist low-speed manoeuvring by providing the driver with a complete surround view of the vehicle in real time and in a single image. Research has shown that in the time it takes to scan four mirrors, assess and then react to hazards, a vehicle could travel as far as 10 metres – even at speeds as low as 5kph.  Backeye®360 buys back valuable time, protecting not just the driver, but any road or pavement user around the vehicle.

Backsense® radar obstacle detection is also designed to protect people and objects in blind spots – in this case by providing an in-cab audible and visual warning. The radar works effectively in harsh weather conditions and is programmable with a bespoke detection range of up to 30 metres in length and 10 metres in width.

Our latest generation of MDRs are the most advanced yet, with WiFi and/or 4G connectivity capabilities, allowing data to be accessed from the recorder without physically having to go to the vehicle. By capturing data from vehicle-mounted cameras, MDRs help to disprove fraudulent claims, or quickly settle a claim even when the HGV driver was at fault.

Waste vehicle fleets around the world use our safety systems to help prevent accidents and save lives. MDR is also being widely adopted to monitor and protect vehicles, and tackle the increasing problem of crash-for-cash scams.

One of our most recent customers is Kier Environmental, which has a weekly recycling and waste removal contract with Walthamstow Forest Borough Council in London. The decision was made to increase security after its vehicles suffered damage, and in the first four weeks of MDR use alone, Kier was able to refute a number of claims. For more information, click here.

Another customer, RTS Waste, has fitted its entire mixed fleet of 40 vehicles with a full suite of Brigade systems including camera monitoring systems, MDR, ultrasonic sensors and reversing alarms. Read all about RTS Waste’s experience with Brigade products here.

If you’d like further information about Brigade and our commercial vehicle safety products and services, please don’t hesitate to get in touch.