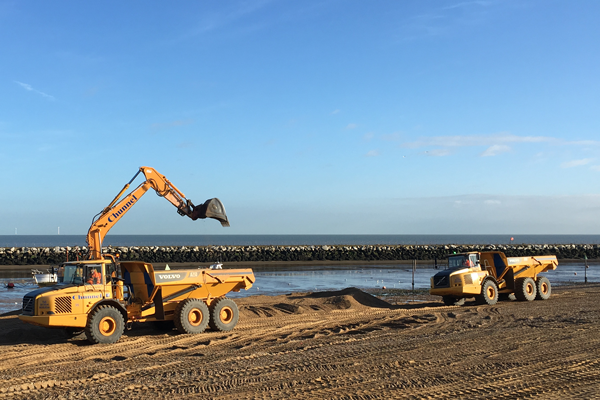 From construction to logistics to refuse services and travel, vehicles play an important role in operations and infrastructure across the country. Whether driving on-road or operating machinery on-site, workplace safety is always a huge concern and number one priority.

In the UK, at least 31 percent of fatal crashes and one in four serious injury crashes involve someone driving for work. However, according to the road safety charity Brake this is likely to be a substantially underestimated.

One of the most prevalent causes of workplace injuries and fatalities is being struck by a reversing vehicle. Reversing incidents account for a quarter of deaths in the workplace and 90% of these occur off-road in loading bays, lorry parks, quarry sites and warehouses. The rear blind spot is a huge problem regardless of the vehicle or machine and is one of the main causes of reversing incidents.

Proud of our safety heritage

When Brigade’s founder, Chris Hanson-Abbott O.B.E. introduced the first traditional ‘beep beep’ reversing alarm to the UK and Europe in the late 1970s, the potential for these alarms to save lives was quickly recognised. However, over time, they have been shown to have various inherent issues. These include noise pollution and the associated disturbances, and the overall safety credentials of the traditional ‘beep beep’ system, which can be unreliable, confusing and often ignored.

A safe and sound alternative

Here at Brigade, we recognised these issues and worked hard to find a solution. Our research led us to a quieter and safer alternative in the form of ‘white sound’.

Created using broadband technology, Brigade’s bbs-tek® White Sound® reversing alarm emits a ‘ssh-ssh’ sound, similar to breaking waves, that’s highly directional, gentler on the ear and easier for pedestrians to pinpoint. It’s estimated that this innovation has helped to save thousands of lives since being introduced in 2001. It is also currently the only reversing alarm to receive a coveted Quiet Mark award from The Noise Abatement Society  – the only international mark of approval for low-noise technology.

The sound from bbs-tek® subsides quickly outside the danger zone, meaning the alarms don’t cause noise nuisance. Furthermore, with its multi-frequency range, White Sound® alarms can operate effectively at five decibels lower than a conventional beeping alarm, making them approved for night-time deliveries.

One company which has benefitted from fitting Brigade’s range of vehicle reversing alarms to its fleet of concrete mixing trucks is Lafarge.

As well as bbs-tek®, Lafarge also installed Brigade’s award-winning Backeye®360 – an intelligent camera monitoring system that eliminates blind spots by providing a complete surround view of all four sides of a vehicle.

While ‘beep beep’ reversing alarms are still widely used across the globe, we are encouraging operators to consider replacing these wherever possible with the improved multi-frequency version and support our mission for safer roads and workplaces.

Here at Brigade, regardless of which industry you operate in, we have a full range of vehicle safety systems to suit your requirements. Please get in touch to find out more about how our product range can help you to prevent collisions and save lives.