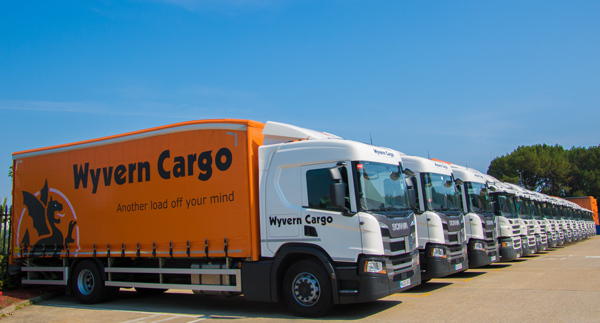 Wyvern Cargo has been providing distribution services and warehousing to industrial sectors throughout the UK since 1975, including fulfilling part-load, groupage and pallet network deliveries on both next day and time delivery options. The company has purpose-built distribution hubs in Poole and Wellingborough, along with a fleet of 65 modern vehicles ranging from 7.5T rigids and 44T articulated trucks.

As part of its commitment to safety and quality, Wyvern Cargo had previously fitted a range of equipment to its vehicles. This included dash cams and SD cards to help provide evidence in the event of insurance claims. However, Wyvern Cargo found these devices to be very limited due to a restricted field of visibility, low quality footage and cumbersome monitoring functionality. In the event of an incident, the Transport Manager was finding he was unable to download any footage until the vehicle was returned to the depot, which proved to be time consuming and inefficient. Additionally, footage was in danger of being permanently lost due to issues with the SD card failing or being over-written.

Trevor Green, Transport Manager of Wyvern Cargo, turned to Brigade Electronics for help finding suitable alternatives that would solve the issues he had been experiencing with the existing system. As part of Brigade’s Service Partner scheme Brigade referred Wyvern Cargo to a local Brigade Service Partner, Hall’s Auto Electrical. Hall’s Auto Electrical are able to supply and fit Brigade equipment as well as provide a wealth of knowledge on Brigade systems.

Brigade’s MDR systems can simultaneously capture footage from up to eight vehicle-mounted cameras, providing excellent all-round visibility of the vehicle and helping to provide irrefutable evidence in the event of incidents or insurance claims.

Wyvern Cargo chose to install Brigade’s 4G range of MDRs, which can be connected to Brigade’s fully managed 4G cloud service, BRIDGE. This means data can be instantaneously accessed and live streamed from the recorder without having to physically enter the vehicle or wait for it to return to the depot.

Other benefits of Brigade’s MDR range include:

Having previously trialed similar systems from other companies, Trevor said:

“The reps from other companies promised their equipment was made in the same factory as Brigade’s, but would cost less, and I almost bought into the idea. However, it quickly became apparent that this was not the case. The competitors’ systems were nowhere near the same quality as Brigade’s and their online platforms were complicated to use with downloads taking hours at a time to complete.”

Brigade’s products have been approved by OEMs (Original Equipment Manufacturers), including Scania and DAF. This makes them ideal for large fleets and is another reason that Trevor has been extremely pleased with the products. He continued:

“Chris Carradine, business development manager at Hall’s, ran through the different streaming options with us and I was immediately impressed with the quality of Brigade’s overall package.  We had Scania repair and maintenance package contracts and because Brigade’s systems were approved by them, it took the worry away from breakdowns when fitted from new.  Similarly, DAF had recently taken on Brigade in the same fashion”.

In addition to Brigade’s MDR and BRIDGE service, 18 of Wyvern Cargo’s Scania rigid vehicles were also fitted with Brigade’s cameras to the front, sides and rear. As each Scania vehicle already comes with a low-fitted reversing camera as standard, Brigade’s rear camera was installed higher up, overlooking the tail lift and road, to provide an enhanced field of vision.

“Being able to ‘dial in’ and see every angle of ‘what happened’ instantly has made incident reporting much simpler. Details are not being missed and incidents can be reported to our insurers within minutes,” said Trevor.

“It is a very, very good package overall. We were pleasantly surprised by how small the difference was in cost of Brigade’s systems versus their competitors’ systems, which are much lower quality in comparison. My advice would be to get the best and stick with it.”

As well as quality products, Trevor recognised the focus on good service and support provided by Brigade Service Partner, Hall’s Auto Electrical. “Hall’s provide us with good communication and they listened to what we want rather than telling us what they think we needed. The fitting was of a good standard and all arranged before delivery so we didn’t have any vehicles off the road.  They also helped us to set the system up so that we could adjust the picture ourselves.”

Chris Hanlon, Quality Manager of Wyvern Cargo, manages the general insurance claims for the company and is responsible for downloading new camera footage from the MDRs. He said:

“The best parts of Brigade’s system are the quality and the speed – which is almost instant. It is easy to use as well. Many other systems were just over complicated. Reading number plates with AHD cameras is also another essential element.

“We like the tracking feature too, because even though we have existing trackers, it helps us to pinpoint the footage we need using time and location, meaning we don’t use too much data. For instance, if the accident happened at around 13:00 hours, we can locate it straightaway.”