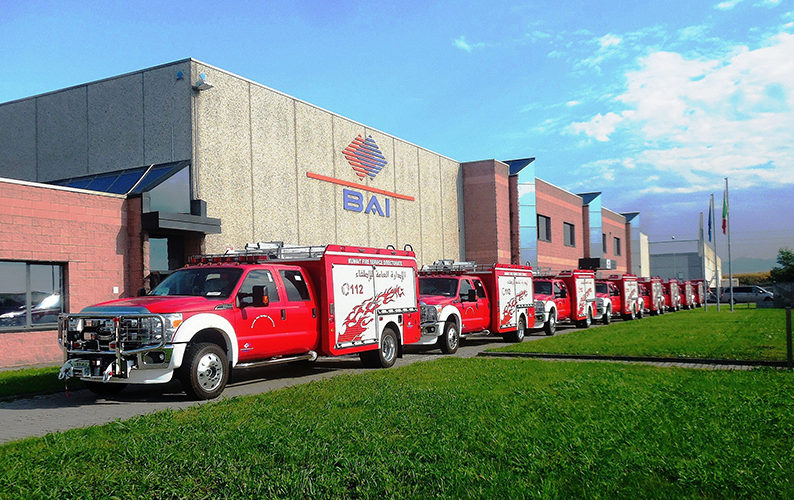 BAI (Brescia Antincendi International) Srl, is one of the leading Italian companies specializing in the design and production of firefighting and rescue vehicles.

The headquarters are in Banolo Mella, south of Brescia, a strategic location with good connections to customers such as fire brigades, local authorities and airports. BAI, in just over a couple of decades, has reached an operating structure of 130-140 employees, in addition to a network of global agents.

BAI has distributed 3,000 tailor-made fire engines worldwide which includes the production of 21 VP 8 M fire trucks destined for the Middle East. These dual cab vehicles are designed for quick response and have been equipped with a variety of safety aids for the safe working of operators and those around them. As an addition, BAI has added Brigade Electronics’ Backsense® radar obstacle detection system. The programmable radar detects obstacles within in a range of 3 to 30 meters long and between 2 and 10 meters wide and can exclude fixed objects or body parts.

BAI were very satisfied with Brigade Electronics who have been leaders in vehicle safety solutions for over 40 years. They have subsequently decided to fit another of Brigade’s products on a demonstration truck made specifically for Germany, where more stringent safety and quality standards are in force.

The demonstration truck is a municipal fire engine, model HLF 10, built for operation in urban environments. BAI decided to increase the safety of the driver, pedestrians and other vulnerable road users by fitting Brigade’s Backeye®360 Select camera monitor system. The intelligent system gives the driver a 360° view of the vehicle and its surroundings using images from 4 wide-angle cameras. These images are simultaneously stitched together to provide a single image on the in-cab monitor, which is particularly useful when maneuvering in busy urban environments. In addition, Brigade’s mobile digital recorder can also be used to record this video footage, providing irrefutable evidence in case of an accident, false claim or vandalism.

Safety systems are imperative for emergency vehicles with devices becoming fundamental to the protection of people and vehicles. The success of BAI is partly due to their implementation of these safety systems.