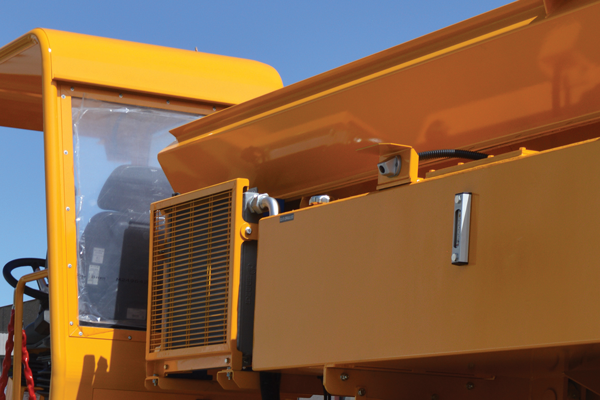 Brigade Elettronica and Bianchi Casseforme are two well-established partners, born from the intuition of their founders and their propensity for innovation. The former in fact, brought the first reversing alarm to

Europe 45 years ago and gradually specialised and established itself in the vehicle safety sector; the latter, in the early 1960s, built the first metal formwork in Italy to replace wooden formwork and, in the 1980s, created Speedy, its renowned concrete distribution machine, after Mr. Mario Bianchi saw a prototype in the United States. A 3-4 m3 concrete distributor that was versatile, economical and, above all, fast and reliable. This was the turning point for a company already on the rise in the precast concrete industry, so much so that in the 1990s it entered the European market, particularly the Spanish market, and in 2008 it entered the world market, bringing exports to almost 65% of total turnover. The company’s activities are aimed at the precast market and include formwork for industrial, commercial, civil and residential precast elements; concrete distribution systems; complete and Carousel plants for automated production; magnetic, prestressing and vibration systems; lifting and fastening accessories.

Today, almost sixty years after its birth and with the third generation already working in the company, Bianchi Casseforme continues along the path traced by its founder, focusing on innovative and advanced technologies, such as the new electric Speedy, now under development. The current version of the distributor is driven by an internal combustion engine powered by diesel, but the electric model, available soon, is certainly a winning choice, especially in order to comply with increasingly stringent emissions regulations, especially when, as often happens in Italy and Europe, it has to work in completely closed environments. There will be no restrictions on its use, and it will be approved for any country. This is a new challenge for Bianchi Casseforme, with its long experience and exclusive know-how, production of around 10-20 machines per year and an installed base of more than 400 units.

Elettronica devices in almost all machines. These include the Backsense® radar and the Backeye®360 camera and monitor system. Backsense® uses FMCW (frequency modulated continuous wave) technology, which ensures accurate and instantaneous detection. Its range can be configured, depending on the vehicle, from 2 m to 10 m wide and 3 m to 30 m away, and customised detection areas are possible to exclude fixed objects or bodywork elements. Extremely robust in design, Backsense® has an easy-to-read 5-stage display with corresponding audible alarms. A device assembled by Bianchi Casseforme to meet the needs of customers with heavy duty cycles, enabling 130 m3/day of concrete to be poured efficiently and safely.

Backeye®360 is a 360-degree all-round vision system that uses special software to combine and process footage from four ultra-wide-angle cameras into a single image, which is then immediately reproduced on the monitor in the cab. In addition, the Backeye®360 allows specific views to be activated by means of different triggers, and the monitor can be split to show the entire vehicle and a specific area at the same time. A system that eliminates blind spots to protect operators. Bianchi Casseforme installed it easily on Speedy, since the cameras are mounted on the upper part of the vehicle, rotating together with the mobile part of the machine. For the in-cab monitor, they opted for the more resistant 7″ waterproof version.

The real innovation, not only in terms of security, is the connection of the Backeye®360 to MDR, a mobile video recording system, chosen in its Wi-Fi and 4G versions, which meets certain criteria required to certify machines for Industry 4.0. In addition to recording and archiving camera footage, MDR allows the machine to be connected to the company server and monitored in real time. In other words: geolocation, exchange of information on machine alarms, live display of work phases, with the possibility of intervening in the event of anomalies. Features that have caught the interest of Bianchi Casseforme’s customers, who, in turn, confirming their propensity for innovation, have investigated and studied the Industry 4.0 directive and guided them in the choice of the most suitable devices. Obviously Brigade Electronics.