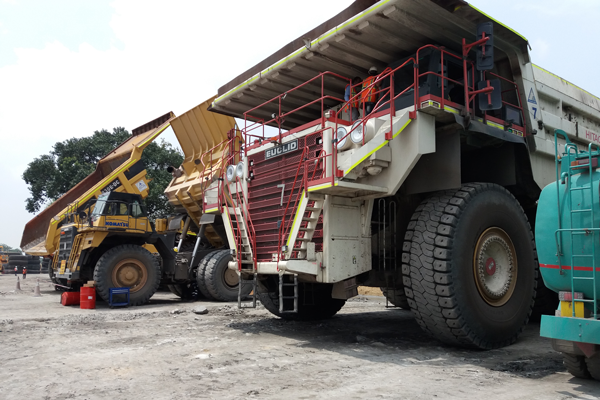 Founded in 1974, Davesmen have over four decades of history in supplying the automotive market and have extensive knowledge of mining safety in India. Today, the company supports mines throughout India by supplying and fitting Brigade’s range of vehicle safety solutions on to HEMM (Heavy Earth Moving Machines) as a national distributor. We sat down with Shamit Dave, Managing Director of Davesmen, to discuss how Brigade’s products have been adopted in India and their application to the mining market.

India’s steel and iron export market was worth as much as $10 billion in the year 2018, a large contributor and driver for the Indian economy. At its roots, mines across India operate to extract minerals and ores to produce the metals we see used across multiple industries around the world. The vehicles putting in the miles throughout these mines are typically dump trucks, hauling raw materials at a capacity in the range of 40 short tons (36 t) to 496 short tons (450 t), a gargantuan feat.

However, with such enormous vehicles operating, mining is not without its challenges, especially where health and safety is concerned. Davesmen have noted that many of the accidents that do occur in a mine are fatal and are on a mission to change that. Over 1,000 recorded fatalities at Indian coal operations were reported in 2017 which does not take in to account the many other types of mines across India.

This extreme number of accidents forced change at a government level with the introduction of tighter laws around health and safety and mining safety. In India this year the Motor Vehicles Amendment Bill was passed on July 31st which increase awareness significantly.

Shamit Dave said “Safety is of prime importance now more so than ever. Laws have become stringent which has helped India adopt a better safety culture. Safety has become a major part of daily lives now in this particular sector.”

The crux of this issue stems from the sheer size of dump trucks. With such a limited view from the cab, a driver must be careful to avoid workers and objects in the close vicinity. It is impossible for a driver to see directly in front of the dumper and to the near side of the vehicle, an extreme danger for those close to and in the path of the vehicle. To help combat this, Davesmen specialise in fitting Backsense® radar sensors to warn the driver when a stationery or moving object is detected.

“Brigade’s range of products has been received well by the mining market. Ultimately the radars help to keep everyone working in the mines safe and alleviate some of the stresses the drivers face by detecting anything that could be in the danger zone. The quality is also second to none and continues to perform in such difficult conditions.”

Many mines also opt to fit the Backeye®360 to its dump trucks to completely eradicate this blind spot issue. A birds eye camera system provides a picture of the vehicle from above on a monitor inside the drivers cab, eliminating all blinds spots, perfect for assisting with low speed manoeuvring.

“We have received excellent feedback on the Backeye®360 system, especially when it is coupled with Backsense® Radars. Drivers particularly like that they can see the blind spots surrounding the entirety of the vehicle, which again relieves the driver from the stresses of driving in the mines. Those working in Operations also like that there are systems in place to avoid accidents. It means there are less lives at risk and less chance of the company having to pay out in terms of vehicle damage and repairs.”

Along with improving vehicle safety in the mines, Davesmen are looking forward to a prosperous future. India’s markets are growing rapidly with big changes expected in the automotive industry.

“The future seems very interesting and filled with optimism. India and the mining sector are on a huge growth trajectory which gives us hope for new markets. We see awareness increasing about mining safety in India everyday. The new laws which has been coined are going to provide a major boost for the growth of the Industry.”