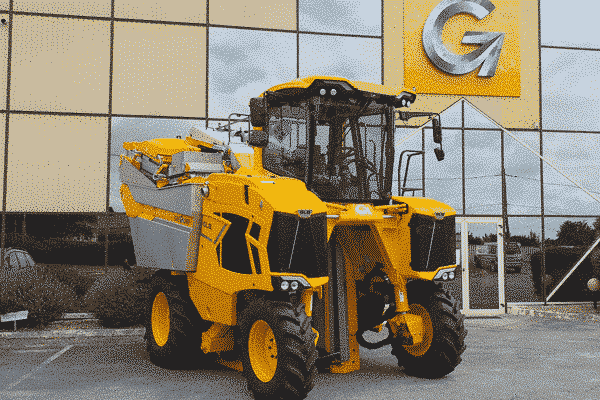 Gregoire’s latest line of grape harvesters has seen a significant investment in safety solutions, becoming the first set of harvesters in the wine industry to offer an integrated camera system that eliminates blind spots surrounding the entirety of the vehicle.

Harvesters are generally equipped with attachments and technical aids that create awkward blind spots for a driver to contest with. Gregoire have taken enterprise to offer safety solutions across their range, helping operators reduce collisions and save lives.
The standard ERGOcab is equipped with cameras placed on the front left of the machine, providing a visual of the vines to be harvested, and a second at the rear, giving the driver full visibility of the rear of the vehicle and around the grape bins. Switching from one camera to another is automatic when changing the direction of the vehicle.

As an additional option, Brigade’s Backeye®360 is offered by Gregoire. The Backeye®360 camera system completely eliminates blind spots by providing the driver with a bird’s eye view of the vehicle on a monitor in the cab. Unlike lesser systems that require multiple monitors in the cab, Backeye® 360 allows the driver to check just one screen to see the possible dangers or obstacles. Workers on foot can now stay in sight of the driver within a 4-metre radius surrounding the vehicle meaning they are better protected with a reduced risk.

When starting the machine, the Backeye®360 display is selected by default. When reversing the machine, the screen automatically switches to the rear camera. To facilitate the use of Backeye®360, a switch placed on multifunctional armrest makes it possible to navigate between the different cameras to obtain a full-screen view of one of the 4 sides of the machine if necessary.
This system consists of the following:

– 4 mini-wide-angle cameras positioned on each side
– Specific Backeye®360 calculator that creates a single image from the 4 cameras, displaying an image of the machine seen from above.
– 7 ” colour screen in the cabin replacing the standard 5 ” colour screen

Gregoire vehicles are designed and manufactured to operate under the most difficult conditions, so choosing a reversing radar sensor that met IP69K standards was extremely important. Brigade’s Backsense range of radar technology has the advantage of being able to operate day and night and in very dusty or foggy conditions, allowing it to work in all types of environments whilst meeting the rigorous IP69K temperature and shock tests. An easy selection for Gregoire to make.
Radar On-Screen Display (OSD) uses a frequency modulated continuous wave radar that provides detection up to a distance of 30 meters in length and a width of 10 meters. It is able to detect fixed and moving objects, most importantly people working in the vicinity. The reaction time of the sensor is less than half a second, allowing almost instantaneous detection of a new object in the detection area.

Working in conjunction with the Backeye®360 camera monitor system, the radar on-screen display warns the driver of obstacles in the danger zone by overlaying audible and visual radar data onto the camera image on the monitor. By default, this square is blank if not detecting an object. The display then the colour from green through to red depending on the distance between an object and the vehicle. A beep sound accompanies the appearance of the rectangle in order to further alert the driver of an object.